Dr Megan Balks and Prof David Lowe (both from the Earth sciences group, School of Science, University of Waikato, Hamilton) have teamed up with Dr Allan Hewitt (Manaaki Whenua–Landcare Research, Lincoln) to write a book on the soils of New Zealand. Published by Springer in February 2021, and part of the World Soils Book Series (WSBS) initiated ~10 years ago by series editor Dr Alfred Hartemink (University of Wisconsin–Madison), the book is the first general text on the soils of New Zealand to be published in more than 30 years. It is the only book available that describes New Zealand’s soils in the context of the New Zealand Soil Classification (NZSC) (developed by Hewitt) that has been used in New Zealand since 1992. For international readers, the book includes equivalent terms for NZSC classes using the international soil classification systems, Soil Taxonomy and World Reference Base.

The book provides an up-to-date overview to the soils of New Zealand structured according to NZSC and encompasses 18 chapters. Starting with an introduction on the importance and distribution of New Zealand soils (Chapter 1), it subsequently provides essential information on each of the 15 New Zealand soil orders in separate chapters (Chapters 2 to 16). Each chapter includes a summary of the main features of the soils in the order, and their genesis and relationships with landscapes – which may include an evaluation of Quaternary environments and a stratigraphic approach to underpin the ‘competing’ geological and pedological processes involved in upbuilding pedogenesis that predominate in a number of orders. The key properties including examples of physical and chemical characteristics of the soils, and their classification, use, and management, are also included in each chapter.

The book then features a chapter (Chapter 17) on soils in the Ross Sea region of Antarctica (with which New Zealand has had a >100-year-long explorative and scientific connection) and concludes (Chapter 18) by considering New Zealand soils in a global context, by examining soil-formation pathways, and by covering methods used in New Zealand to evaluate soils and assist in land-management decisions. A detailed 14-page index completes the volume. Every chapter also includes a 200-word abstract.

The authors’ aim has been to provide a clear, modern and reasonably detailed account of New Zealand’s soils for undergraduate and graduate students, land managers, farmers, and those with an interest in New Zealand's natural history and landscapes. All chapters are written by the three authors, which helps to maintain a continuity of style and coherence, whereas many other books in the WSBS comprise edited volumes with multiple authors each contributing chapters.

The book comprises 332 pages with 192 illustrations (147 in colour). It is available as a hardcover or e-book, or e-chapters can be purchased individually.

The book was formally launched on Monday 28 June 2021 at 12.15 pm at the University of Waikato in Hamilton during the joint soil science conference of the New Zealand Society of Soil Science and Soil Science Australia held simultaneously in two hubs, one in Cairns and one at the University of Waikato, Hamilton (along with virtual participation). The Right Honourable Simon Upton, Parliamentary Commissioner for the Environment, will spoke at the launch. 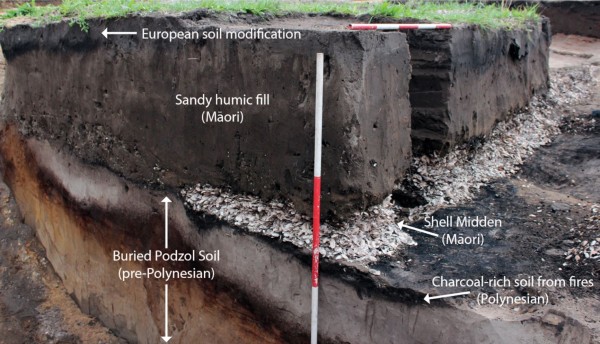 Illustration from the book’s chapter on Anthropic Soils (Ch. 3) showing a beautiful and informative layered soil (Artifact Fill Anthropic Soil in NZSC) over a buried Podzol Soil at an early 17th century site at Cooks’ Beach on the eastern coast of Coromandel Peninsula (Hoffmann 2017). Photo courtesy of Andrew Hoffmann.