On Saturday evening 11 July 2020 Chuck Landis, a very kind man and excellent colleague to those of us here at Otago in the 1990's, passed away after suffering a severe stroke on Friday.

Chuck came with his family to NZ in the early 1960s from his native Pennsylvania, by ship and by steam train. He completed a PhD here at Otago with Doug Coombs then remained as an academic teaching sedimentary geology and global tectonics until he retired in 2001. I first met him when he re-visited UC Santa Barbara while I was a PhD student there, and he was one of a number of Otago-UCSB research, and personal, connections that certainly played a role in bringing me here. He was a generous mentor, and for a decade my next-door neighbour in Warrington. When I arrived in 1993 I joined the papers he was teaching about sedimentary processes and sedimentary petrology, and a 4th yr paper "Circumpacific Geology" that we taught together every year and was wonderfully varied but usually had elements of geology from New Zealand, California and Japan, all places where he did significant work, particularly on tectonostratigraphic terranes. In our shared teaching, Chuck was always happy to try new things and between making room for the new guy and various university changes, I don't think we ever managed to teach a paper with the same content and structure more than once.

After retirement, Chuck contributed time to the Orokonui sanctuary, and the Botanical Society of Otago. An excerpt from the Society's newsletter in 2003 explains where much other time was spent.  "Field trip to Warrington and Seacliff. Carol and Chuck Landis live at the old James Powell Convalescent Home in Warrington. Their large garden contains ornamental trees and an extensive variety of shrubs. Many rhododendron, including several original species, will be in bloom and a range of unusual Magnoliidae is also present. An adjoining area of "bush" contains a range of New Zealand trees, shrubs and ferns. The central part, containing about 95 species of East Otago provenance, is surrounded by a belt comprising natives including many sourced from outside the local area. Highlights include Pennantia baylisiana, Alseiiosmia spp. and three Ixerba brexioides. The possible effects of companion plants on Ixerba growth are very interesting (- as Geoff Baylis pointed out in an earlier issue)." 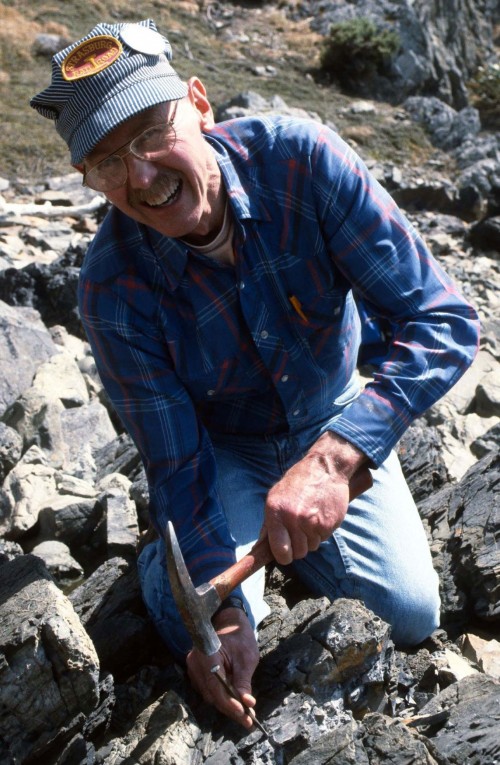 Chuck looking for Triassic fossils on a geo-soc field trip in Wellington area, 1997