Thank you to everyone who took part in the Geobake across the country and sent in their entries to be judged. We had lots of excellent entries this year, and the decision was a close call.

Congratulations to the winner of the Geobake 2021: Jamie Delano, with her wonderful Sourdough Eruption creation!

This sourdough bread loaf depicts a basaltic lava eruption. The lava is erupting both from a vent (top) and through subsurface lava tubes. The different dough colours/flavours represent different temperatures of lava—yellow is the hottest, orange is slightly cooler but still molten, and black is cooled, solid basalt.

We loved looking through all of your bakes and learning a little bit about the geoscience behind each one.

Below is a collage of some selected entries from this year. 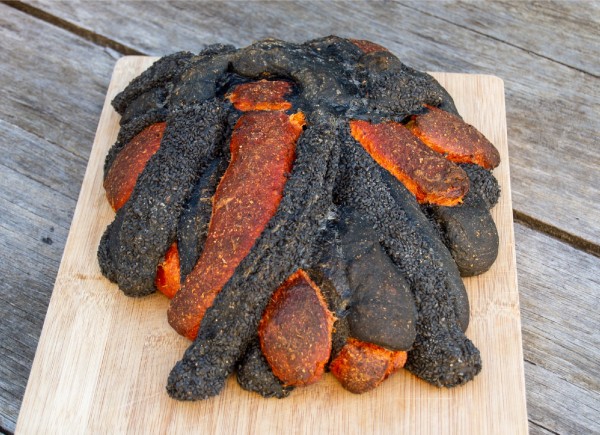 A selection of other entries

Starting from the top row (left to right)

These cute Tiny Teddy geologists didn't fill out the correct health and safety forms to go sampling on the volcano.

This volcanic eruption cake is based around Moana Loa volcano. This volcano sits amongst a chain of volcanoes which form across the Hawaiian Islands. It is one of Hawaii’s largest volcanoes and is peaked to be one of the largest volcanoes on earth. The thick viscous, pahoehoe lava flow can be observed as well as more rubbly A’a lava flow.  The smooth ropey surface and angular pieces of lava deposits reflect differentiation in flow dynamics within a volcanic system.

The iconic Moeraki Boulders are large septarian concretions developed in Paleocene-Eocene Abbotsford Formation mudstone about 70 km north of Dunedin. The recipe comes from the classic 1996 book “Alison Holst’s Chocolate Temptations”. Ironically her recipe is called ‘Little Lava Rocks”, but the resemblance to concretions is much stronger.

I created a ganache-weathered Toka Ngawhā - Split Apple Rock cake, inspired by one of my favourite websites GeoTrips. The Cookies & Cream cake represents Separation Point Granite, which through erosion, gives Abel Tasman its characteristic golden crumbles seen under the blue jelly ocean! A pod of Hector’s Dolphin can be spotted swimming around the fudge granite boulders.

A red velvet and chocolate ganache bathymetric diagram showing the jelly oceanic zones in terms of depth, with (roughly) depth appropriate white chocolate ocean-going animals (can you identify all six?).

This sourdough bread loaf depicts a basaltic lava eruption. The lava is erupting both from a vent (top) and through subsurface lava tubes. The different dough colors/flavors represent different temperatures of lava—yellow is the hottest, orange is slightly cooler but still molten, and black is cooled, solid basalt.

Basaltic thin sections in cross polarised light, with a porphyritic texture with a glassy ground mass and phenocrysts of olivine, plagioclase, pyroxene and amphibole.