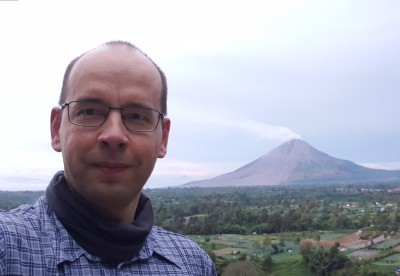 The paper involves the dating, for the first time, of the entire stratigraphic sequence of 13 rhyodacitic to rhyolitic tephra beds of the Mangaone Subgroup (MSGp). These beds were erupted from the Okataina Volcanic Centre (OVC) between ~43 ka and  31 ka, with the entire sequence emplaced in ~12,100 years, representing a surprisingly rapid eruption frequency of one event per ~930 years on average.

Underlying this work is the U-based zircon double-dating method that Martin developed during his post-doc at Waikato University. The technique has provided a new method to accurately date relatively young magmatic and eruption events that are difficult to date by other radiometric methods.

In the 1950s and 1960s Alan Pullar (left) and Colin Vucetich (right) worked for the DSIR Soil Bureau, mapping soils in the North Island.   Alan worked in Gisborne and Whakatāne, and Colin around Rotorua.  They recognised that the soils were formed on volcanic ash layers, which were often visible in road cuttings.

The men started tracing out distinctive ash layers across the region. Work on ash layers (later called tephrostratigraphy) was outside official Soil Bureau policy and was banned. Much of their work was therefore done in weekends and holidays on what they called ‘secret correlation missions’.

Between 1963 and 1975 Colin and Alan published a series of papers on the sequence and characteristics of the main volcanic eruptions in the Taupō and Rotorua region. This work has been the foundation for later volcanological studies as well as the understanding of soil properties.

Initial funds for the Pullar Vucetich Prize were donated by family and colleagues of Alan Pullar and Colin Vucetich.