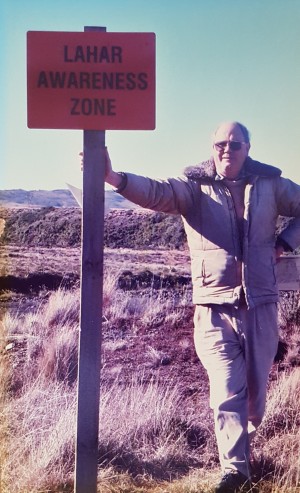 This award reflects Vince’s career-long contributions to the former Geological Society of New Zealand, its Manawatu Branch, and the wider geoscience community.

Vince was an enthusiastic co-founder of the Manawatu Branch of GSNZ in 1981, and was the trail-blazer for Manawatu and Massey involvement in GSNZ. He was the first Manawatu-based member of the National Committee (1974), the first Manawatu/Massey President of GSNZ, and he convened the first Massey-based conference of the Society in 1986.

Vince has also been a leading member of the New Zealand earth science community for over 50 years. He became an internationally-recognised authority on volcanic processes and hazards and was among the first to use science to advocate that communities become prepared for the next eruptions from some of New Zealand’s largest volcanoes. The 241 publications with Vince’s name on them in the Bibliography of New Zealand Geoscience is testament to his enormous scientific output.

Given that the 2022 conference was held in the Manawatu, largely thanks to Vince’s efforts to establish a branch here many decades ago, it seems only appropriate to present this award to Vince on his home soil. The GSNZ is indebted to Vince for his many decades of service to our society and geoscience in the Manawatu and beyond.

The GSNZ Honorary Member award is presented to an individual who has contributed significantly to the success of the GSNZ and/or its predecessors and to the advancement of the geosciences in New Zealand. It is not necessarily about recognising a lifetime contribution to geoscientific research but rather it acknowledges outstanding and sustained contributions made to the successful and continued operations of the GSNZ and the wider geoscience community.